Only 24 hours after beginning the tailgate for the LSU game, we were back at it, this time on our way to Downtown New Orleans, preparing for the opening game of the beloved Saints season.  We packed up and headed home from Baton Rouge around 10AM Sunday morning, making very necessary stops at McDonald’s and Taco Bell for breakfast.  People from all over the state and Gulf Coast make the drive to NOLA, but the drive wasn’t too bad until we got inside New Orleans city limits. As on every game day, it’s exciting driving towards downtown and seeing the Superdome come over the horizon.  The first game of the season only made it even better.

The culture in New Orleans is well documented for music, food, and Mardi Gras, but it’s still amazing to see the city on the morning of a Saints game.  Because the city is in Central Time, most Saints games begin at Noon, and there’s one less hour to tailgate than in most cities, but the people still come out in full force. 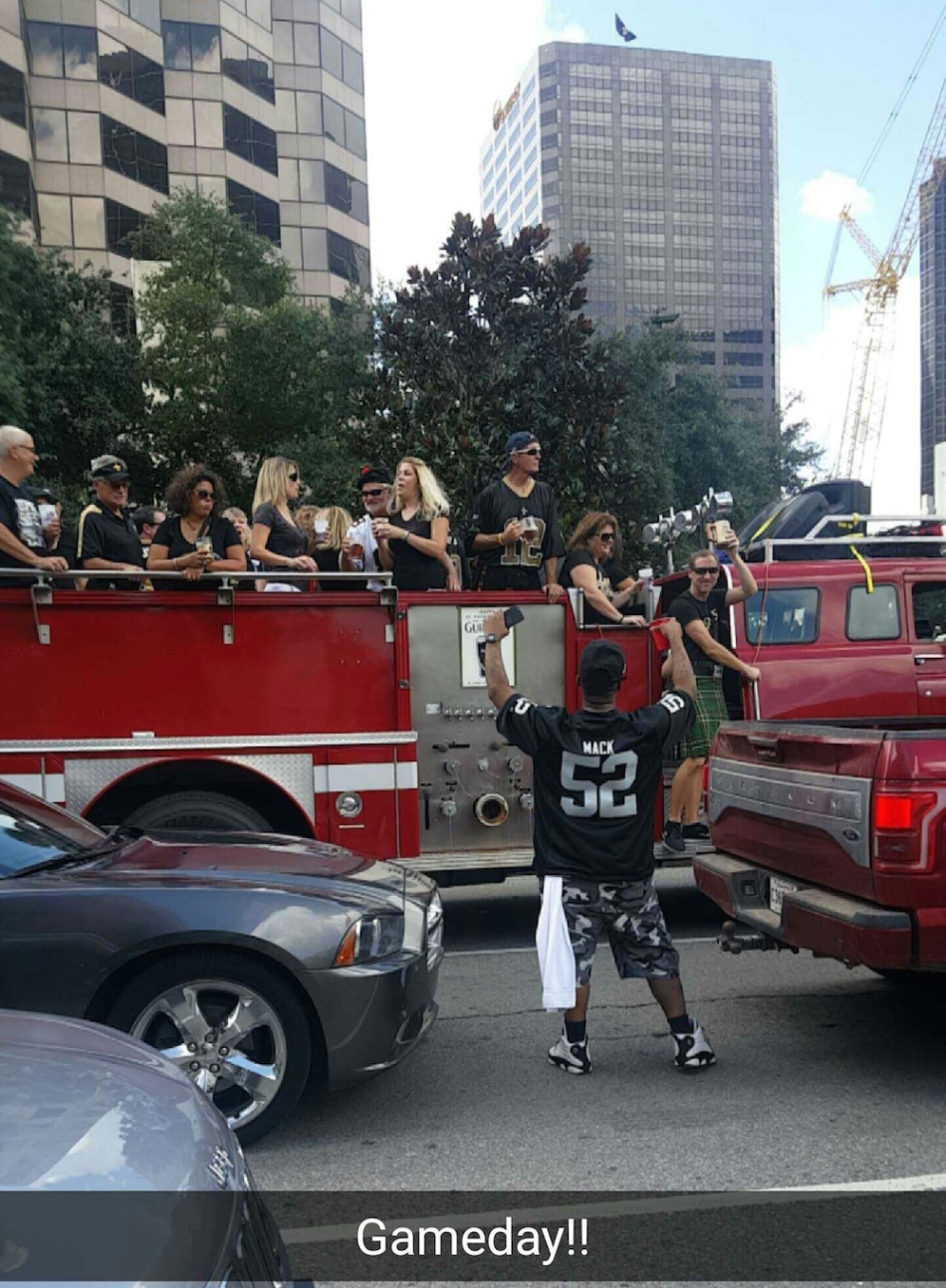 I was explaining to my friend from college last week some of the things you see in New Orleans that I can’t really picture in any other city, except maybe Vegas.  One of those are the sidewalk bars that pop up for second lines, parades, and Saints games.  There are some official bars outside restaurants, but for the most part a local wheels around a huge cooler full of beer through the downtown sidewalks, routinely past police, and sells them for $2 to $3 a pop.  Considering the obvious demand, I’d imagine this is a very lucrative business plan, and one that while technically illegal (alcohol permit anyone), just makes everything easier and more convenient.  Meanwhile, as I mentioned in my blog about why the NBA All-Star game is returning to New Orleans, people walk up and down Poydras St. towards the dome, while singing “The Saints Go Marching In”, dancing, and stopping along the way at those both pop-up bars.  One group even rented a firetruck party bus to ride to the game in style.

Maybe it’s the fact that I’m a Redskins fan, and the Superdome is the only NFL venue besides FedEx Field that I’ve been to, but even with the team not in its prime years anymore, this stadium still rocks beyond belief. Widely considered one of the loudest venues by players, the high scoring shootout brought lots of cheering, booing, and instances of the home touchdown anthem “Halftime”, by the Ying Yang Twins.  Having a good and exciting team certainly helps the fans show up and get loud, but Saints fans have shown that they are loyal to the end, considering the team has now lost 9 of the last 13 games played at home.  Only three years ago the team won all 8 home games, and that was two years after completing the same feat in 2011.  But that’s one of the great things about the NFL.  Every year brings a new opportunity, and it’s not out of the ordinary for teams to go from first to worst.  In the NFC East, a team hasn’t won the division in back to back years since 2004.  The Raiders on the other hand, haven’t been to the playoffs since 2003, when they lost in the Superbowl.  But this year feels different.  The Raiders have a young and promising quarterback in Derek Carr, who threw 32 touchdowns last year, second year stand out receiver Amari Cooper, and popular defensive player of the year pick Khalil Mack.  With Peyton Manning retiring, Oakland has a legitimate chance to represent the AFC West in the playoffs, and they certainly looked strong in New Orleans.

Chances of catching @brandincooks?
Not likely.

We knew this game would be high scoring because of the Saints explosive offense and porous defense, but didn’t know if it would turn out to actually be enjoyable.  The first quarter confirmed our doubts after Drew Brees fumbled at the Saints 21 on just the 3rd offensive play of the game.  The Saints went into the second quarter down 10-3 before executing perfectly on both sides of the ball, leading to a 17-10 lead heading into halftime.  Both touchdowns , including one on 4th down from the 1-yard line, came on passes from Brees, which was hardly surprising.  During halftime I took the much needed time to get another 24 oz beer and hot dog as football games are seemingly some of the longest events on Earth, and I knew that for the second half I would need supreme energy.  Let’s just say I spent a little too much time in the concourse during halftime, because I didn’t get back to my seat until there was only 7:52 left in the third quarter, but I’m happy it didn’t take any longer.  Sure, I missed the kickoff, and 3 beautiful possessions capped by punts.  But as I sat down, cracked open the beer, and began to unravel the hot dog, I looked up and realized the Saints were on their own 2-yard line.  At this point on the field, up seven, the Saints probably just wanted to get a few yards to make room to get off a safe punt.  Instead, Sean Payton and the offense dialed up a go route for Brandin Cooks on the first play, who appropriately has a 96 speed rating in Madden 17.  He had a step on the cornerback from the start, Brees noticed, and let it fly.  Cooks caught the ball in stride, on his way to a 98-yard touchdown and the longest play in Saints history.

Now at this point, I’m feeling pretty lucky.  This was my second regular season Saints game, and I’d witnessed history twice.  My first game, last year against the then undefeated Carolina Panthers, featured New Orleans scoring the first ever two point conversion on an extra point attempt, though they ended up losing by three.  Things at this point of the Raiders game seemed more promising.  The home team was now up 14, midway through the third quarter, and hadn’t allowed a score since 4:48 left in the first.  Things changed quickly though.  The Raiders ended the game scoring 25 points in 18 minutes, while holding the Saints to 10, in part because of two missed field goals, which would come back to haunt them.  The much talked about play/decision of the game came when the Raiders went for two, down 1, after scoring a touchdown with 47 seconds left in the game.  The Raiders were already 1 for 2 on two point conversions on the day, and coach Jack Del Rio took the approach that if you’re on the road you play for the win, not overtime.  As you probably know by now, they converted on a fade to Michael Crabtree, and the game seemed over.  The Saints had no timeouts left and would have to go about 40 yards to get into position for a 50 yarder, which Wil Lutz, had missed earlier in the 4th quarter.  Once they got the ball, the Saints offense could only get to Oakland’s 43-yard line, which set up the 61 yard attempt that missed as time expired.  Just for perspective, the NFL record for longest field goal is 64 yards.  Although it seemed like all the home fans in the building knew what was coming, it was still painful, because the team had been leading for almost the entire final three quarters.  *You can see the pain from me in the bottom right of the this video*

Newly signed Saints kicker Wil Lutz hit on 2 of 4 field goals, but both missed field goals came in the fourth quarter of a deflating 1 point loss in the dome.

Although the Saints came out with a loss, it was promising to see how well the offense played against a young up and coming Oakland team.  In today’s league, having an offense as explosive as the Saints do, your team always has a chance, and just has to be able to come up with key stops late in the game, which they couldn’t do in Week 1.  Next up on the schedule is a Sunday afternoon matchup against the Giants in the Meadowlands.  Last year the teams played in the highest scoring game of the season, a 52-49 win by the home Saints, in a game that featured a league record 13 combined passing touchdowns.  New York improved their secondary this offseason, but with an offense like the Saints, those new defensive additions may get “killed”, like Sean Smith covering Cooks last week.

#Raiders CB Sean Smith admits he 'was getting killed' before he was benched against the #Saints. https://t.co/FADH1VwiVZ

The Saints next home game is Monday, September 26 against the Atlanta Falcons on ESPN, and will be a celebration of the 10 year anniversary of the team returning to New Orleans, after the 1-year displacement because of Hurricane Katrina.  It should be another high scoring affair, as the Falcons gave up 31 points to the Buccaneers in Week 1.  Being the closest opponent in the division, the Falcons routinely have a large fanbase in town for Saints game, making this one of the more exciting Monday Night games of the NFL Schedule.  Hopefully the Saints will return to their successful play, because even with all the sustained local support, the city goes as the team does.